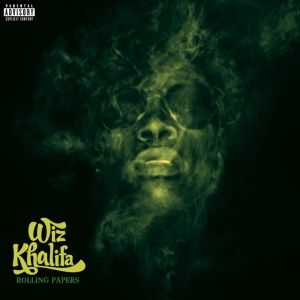 If you follow hip hop blogs, the best of this album has  already been heard. However, the casual music fan  should like this album for its catchy and rhythmic hooks  and beats.

As soon as I hit play in my Itunes and heard Wiz Khalifa’s opening track to Rolling Papers, titled “When I’m Gone”,  I was immediately drawn in by the “All of the Lights-esque” piano. After about a minute the beat and Wiz’s voice finally hit. The song was very reminiscent of the classic Wiz track “This Plane” and proved to be just as catchy. A good first impression for the album, I’d say. But did the rest of the album hold up to the immense hype that has been following Wiz ever since he dropped the hit single “Black and Yellow”?

In a sense, the album as a whole does live up to the hype created by Wiz. Rolling Papers has enough backbone to hold its own amongst hardcore Taylor Gang fans and radio heads alike. Hardcore fans will roll one up to songs like “On My Level”, “The Race” and “Rooftops” while casual music fans will vibe with songs like “Roll Up”, “Fly Solo” and “Cameras”. My only gripe is that most of the best songs have been leaked/released already. Hardcore fans will likely find a bunch of “placeholder” tracks next to the bangers like “Black and Yellow” and “On My Level”.

In another sense, the album fails miserably at showcasing the talent and growth of Wiz Khalifa since the days of Deal or No Deal. After hearing mixtapes Kush and Orange Juice and Cabin Fever, Rolling Papers initial listen leaves you thinking “Wiz can do better”. You can thank the record label and/or Wiz himself for this. Songs like “Roll Up” and “Fly Solo” just have a “commercial” sound and feel to them.  On the other hand, Wiz shines on songs like “On My Level” and “Rooftops” simply because he’s doing him and not catering to the charts. These bass-heavy tracks allow Wiz to spit his melodic, marijuana-induced flow that we all know and love. I’m not knocking Wiz’s singing, because there’s no doubt that he can sing. It’s just some songs are notably forced seemingly in order to get play on the radio.

Wiz’s lyrics this time around are nothing special. After all, when has Wiz spit anything relatively complex or socially conscious? He’s no Lupe Fiasco or Nas, everyone knows that. If you’re strictly fan of rappers like Lupe or Nas, then you should stay far away from Rolling Papers. You won’t find many memorable verses here. With Wiz you get the same old, same old: women, weed and money. Wiz’s versatility allows him to inject any or all of these themes over any type of beat, while also keeping catchiness and a smooth flow intact. His ability to spread these limited themes as far as he has is what impresses me the most about Wiz.

Overall, Rolling Papers falls into the mediocre category in my book. While there are some bright spots, the much of the album sounds like a failed attempt at cracking the Billboard charts. However, Wiz Khalifa knows how to make music, and that’s what matters. There is no doubt that he’ll be a mainstay in the mainstream for years to come.