Only a year removed from a roller coaster ride of a playoff series and only two years removed from a Stanley Cup championship, the Chicago Blackhawks look to regain the top spot in the NHL’s Western Conference. Last season ended in heart-stopping fashion, with the Hawks on the brink of not even cracking the playoffs with the Dallas Stars breathing down their necks, as well as rising from the grave from a 3-0 deficit in the first round of the playoffs to tie the series 3-3, only to lose to the rival Vancouver Canucks in Game 7 overtime. Can the Blackhawks make it farther this time around?

Looking at the names, there’s no doubt that management tried to add toughness and grit to a roster that contained none at all last season. As strange as it sounds, but the Stanley Cup Hawk team had its fair share of gritty, but skilled players like Adam Burish and Ben Eager. These two did a great job drawing penalties by trash talking the opposition and just frustrating them. Carcillo, Mayers and even O’Donnell are capable of replicating Burish and Eager and could help put up a few points as well. Adding Brunette gives the Hawks yet another top six player who is capable of producing 50+ points and can play alongside the Hawks’ best players. Olesz provides some depth and is kind of a question mark. Olesz was the 7th overall pick in 2004 for the Florida Panthers and has yet to live up to expectations, failing to break the 30 point mark. Maybe a change of scenery is what he needs to get going. Montador, O’Donnell and Lepisto provide some good depth on the blue lines as well, as all our workhorses and are willing to sacrifice the body, which also led to great success for the team in 2010.

The Blackhawks managed to get rid of Brian Campbell and his outrageous contact, shipping him off to the Florida Panthers for new addition Olesz. However, although the casual fan might breathe a sigh of relief at Campbell’s departure, puck-moving defensemen like him are hard to come by. The Hawks will hope that the young Nick Leddy can be effective on the team’s powerplay alongside D Duncan Keith. Brouwer, who was quietly becoming a fan favorite, seems to be the biggest loss out of the group. Brouwer brought physicality and size to a team that lacked both last year, but the Hawks traded his services for Washington’s first round draft pick in this year’s entry draft, who turned out to be the talented F Philip Danault (who notched 67 points in 64 games for the QMJHL’s Victoriaville Tigres). The Hawks believe they have enough depth in the farm system to make up for the losses. Goalie Marty Turco turned out to be a huge bust, but his one year deal was worth a try, as he costed nearly nothing. Goalie Corey Crawford has reached his prime and is considered one of the league’s top young goaltenders.

The Offense: General Manager Stan Bowman did a great job keeping the core intact. This might be the year F Patrick Kane and C Jonathan Toews finally take the step to the next level and become 100 point scorers. Toews finished the season in contention for the Hart Trophy, taking the reigns of the team and almost single-handedly leading them into the players. He ended the season with 32-44-76, but his two-way play was really where his value lies. The stats just can’t show that. Kane, on the other hand, had a somewhat disappointing point total, finishing with 27-46-73 in 73 games. A point per game is great from him, but he has otherworldly offensive talent and instincts, so 100 points isn’t out of the picture anytime soon. New additions to the starting six are young gun Brandon Saad, a surprising player to make the cut out of training camp. Saad showed he could compete at the highest level during the preseason, netting a goal and two assists. Andrew Brunette will split time between the first and second lines, bringing veteran experience along with Marian Hossa to the team.

Center Dave Bolland, who I would say is the Hawks’ X-factor, needs to stay healthy if the team wants to win games against top-tier talent. Bolland is one of the best defensive centers in the league and can stop the opposition’s best center. Bolland, however, has only played a full season once in his four year career, and that needs to change. Wingers Bryan Bickell, Michael Frolik, Victor Stalberg, Rostislav Olesz, Marcus Kruger, and Ben Smith round out the bottom six forwards, who will rotate between the third and fourth lines. Jamal Mayers and Daniel Carcillo bring the grit on the fourth line and should be able to do some major damage down low, where it gets down and dirty. They’ll also be our main enforcers, protecting players like Toews and Kane from taking huge shots.

I’m going out on a limb here, but I think Frolik has the skill to be a top six forward on most teams, and may be able to break into the second line on this Hawks team. Frolik put up an impressive 45 points in his rookie campaign on a very weak Florida Panthers team four seasons ago, and I think he has the potential to crack 60 or even 70 on a talented Hawks squad. In the series against the Vancouver Canucks last season, Frolik was one of the more efficient players, going 2-3-5 in addition to a solid +3. He outscored stars like Jonathan Toews and had a better +/- than All-Stars Duncan Keith and Patrick Sharp.

This might sound contradictory, but I just think Brunette doesn’t have it in him to compete at a very high level anymore. I have nothing against his ability and playing history, but a lot of people don’t know that Brunette is nearing 40 years old (he’s 38). Yes, I said he has the potential to put up 50+ points, but I think it’s unlikely.

The Defense: Stud defenseman Duncan Keith looks to regain his form from the Stanley Cup year, where he won the Norris Trophy as best d-man in the league. Keith suffered a very disappointing 2011 season, finishing with only 45 points (he finished the 2010 season with 69), and finishing with an eye-popping -1. Keith had a combined +84 in the three seasons prior to last season’s disappointment.

Young Nick Leddy, who made his debut at age 19 last year, may be one of the surprises of the season. With a year of experience under his belt, Leddy will have matured far faster than most and should be one of the top point scorers, if not the top scorer amongst the Hawks defense corps. He will be an asset on the powerplay and late game situations when the puck is needed to be moved up the ice swiftly. His actual defense will be a question mark, but hopefully Keith can help bail him out when things start to get hectic.

The remainder of the Hawks’ d-men consist of Brent Seabrook, Steve Montador, Niklas Hjalmarsson, Sami Lepisto, Sean O’Donnell, and John Scott. You know what you’re getting with Seabrook, always physical and willing to do whatever it takes to win. Hjalmarsson, like Seabrook, is willing to play his heart out and contribute both offensively and defensively, but doesn’t get the spotlight as much as Seabrook does. Montador will likely be one of the best acquisition out of free agent defenseman required. He was one of Buffalo’s top defenseman last season and is known for his shot blocking, which is something every team looks for. Lepisto and O’Donnell are one year fill-ins that fill out the last two spots on the blue line. Neither are supremely talented, but they get the job done. However, O’Donnell’s age (39) and speed concern me. I can see him getting beat to loose pucks, which could lead to a ton of goals. He shouldn’t get more than 15 minutes of time on the ice per game. 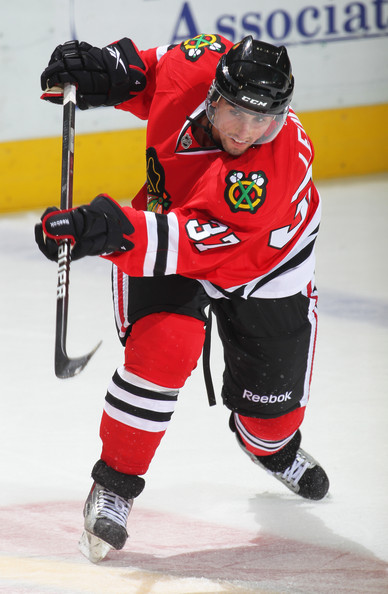 Leddy will play the same role as Brian Campbell did years prior. Although I think Leddy will make a lot less boneheaded plays that Campbell made. Leddy brings a lot of speed and vision to the blue line and has matured greatly in only one year. Expect a lot of goals and assists from him on the powerplay, as he’ll be quarterbacking it with Duncan Keith. 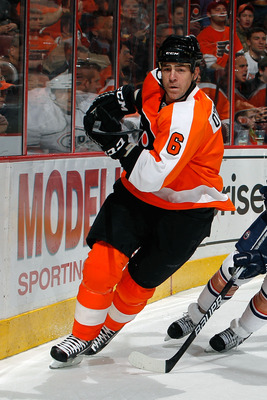 As I stated before, O’Donnell is very old and slow. No, he was never a point scorer at any point in his career, but I just think he’ll get beat to a lot of loose pucks and be ineffective in today’s quick NHL. I can see him taking a lot of stupid penalties and getting on the bad side of fans by the end of the year. He’s like a better John Scott, which isn’t saying much at all.

The Goaltending: This is one of the first years in recent memory where I am completely confident and content with the team’s goaltending. Corey Crawford looks like one of the best Blackhawk goalies since Ed Belfour. I know that I may be crowning him a bit early, but if you had seen his play against Vancouver in the playoffs last year, you’d be confident too. Crawford needs to avoid a sophomore slump that other stud rookie goalies have faced (i.e. Steve Mason, Carey Price). It’s also important to note that goaltending is key to winning championships, just ask the Washington Capitals.

Ray Emery, who entered camp on a try-out, seemed surprisingly spry and looks like a solid backup to Crawford. Emery brings a lot of energy and character to the team. However, Emery is a known head case (evidence below) and hopefully can make it through the season without doing anything extraordinarily stupid.

Here’s a video of Emery trying to kill one of his former team’s trainers: