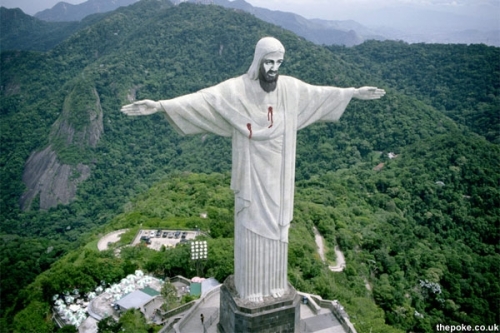 UPDATE: According to another source, this story is a falsity. There are no reports of this incident happening in local newspapers and the Mayor of Rio isn’t even ‘Romairo Valdez’ but Eduardo Paes. Good photoshop I guess.

Although this doesn’t really follow CSC’s formula, me and Bojda are fans of Banksy and I thought this was interesting as well. If you don’t know who Banksy is, he’s basically a James Bond-esque, man of mystery, graffiti artist. Nobody knows much about him and he’s never been caught. I recommend you watch the film Exit Through the Gift Shop to learn more about him, it’s a great film. Anyways, here’s the backstory:

With allegations of police corruption running rife, the James Bond of modern art was somehow able to approach the giant statue by helicopter, apparently using a specially adapted cannister and spray nozzle – similar to that used for insecticide – to apply the paint.

Hanging from the helicopter as it hovered in front of one of the world’s most famous landmarks, Banksy was able to finish his spray-paint amendments within a couple of hours. The affect is astonishing: Bin Laden’s arms outstretched as if waiting for death, the first bullet hole just appearing in his body.

Both tight-lipped and tongue-in-cheek, Banksy is famously complicated in the mouth department, with no comment, communication, or even hint as to what he is trying to say.

“I believe is trying to say that Bin Laden is the modern Christ,” says resident Mario Ombligo, “and for that may he burn in hell.”

Rio’s citizens are up in arms – and since they were already heavily armed, those arms are now piling up really quite high.

“We don’t quite know how he managed it,” says mayor Romario Valdez. “But if he hides his face here again, we will, um….” (source)

I first saw this on Gowherehiphop, my favorite music blog. Here’s what writer Maks G had to say:

If people love God, then why do they restrict freedom? (Freedom to love, live, and express yourself in totality.) Jesus was murdered for practicing his birthright freedom, and now after he is dead we love him for it. Religion is not freedom, it is the opposite. It is restriction to freedom, it is separation, and it is the opposite of love. Religion says our religion is the only religion, which is the very opposite of freedom. The world is plagued with corruption restricting people to express themselves in totality/equality, and we get upset over a statue? We get upset about people expressing their freedom? This to me is insanity.