As expected, the Hawks filled the glaring hole in their defense by acquiring Ottawa Senators’ 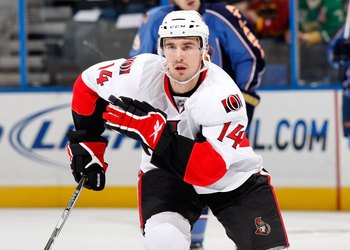 After Hawks defenseman Jordan Hendry went down with an apparent, serious leg injury, it was clear that the Hawks needed a replacement on the blue line. Big John Scott (6’8″ 260 pounds) is a pylon back there, and is really only good for murdering your enforcer with his bare hands.

According to GM Stan Bowman, fans should expect an update on Hendry’s injury status sometime before the Hawks take on the Minnesota Wild tonight at 7 p.m. CT on Versus Channel.

Campoli has been stellar this season for the struggling Senators, who are currently bottom feeders in the Eastern Conference with a measly 51 points (21-32-9). Campoli currently has 14 points on the season (3 G, 11 A) and an impressive -3 for a team that has one of the worst goals against averages in the league (3.14 GAA).

It’s clear that the Hawks are one of the least clutch teams in the league. If you’ve been watching them this year, you’ve likely smashed a few TV remotes by the end of the third period. Their collapses this year can’t be blamed solely on goaltending, Marty Turco was a cheap option who wasn’t expected to do much more than a backup would anyways. In my opinion, most of the blame can be put on the Hawks d-corps. Duncan Keith has been somewhat underwhelming after his Norris Trophy win last year. At this point, our only option is to wait for our prospects in the system to mature and pray that we can win a few games from here on out and crack the top eight in the West come playoffs.

Bad news for the Hawks, as they have announced that Jordan Hendry has torn his ACL and will miss the rest of the season.